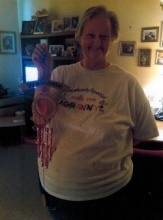 Dorothy Fay Lane Buttrey, age 64 of Lewisburg, passed away on Friday, June 20, 2014 at NHC Healthcare-Oakwood. Mrs. Buttrey was preceded in death by her parents, William Lane and Dorothy Ann Henry Lane, a grandson, Thomas Michael West, Jr., a brother, William Dorris Lane, and a sister, Frances Cadwell. She was a pastry chef and cake decorator before retiring, a caring mother and grandmother, and was of the Baptist faith

She is survived by two daughters, Doris Sparks of Springfield and Sherry Dianna Hays of Columbia; one son, Herman Buttrey, Jr. of Lewisburg; two sisters, Clara Dillard and Virginia Evans, both of Springfield; ten grandchildren, and nine great-grandchildren.

A memorial service will be held Saturday, June 28, 2014 at 10 AM with visitation beginning at 9 AM at Caney Springs Pentecostal Holiness Assembly in Chapel Hill. Burial will be at Henry Cemetery in Monterey.

Condolences of sympathy may be sent to www.billsmcgaugh.com.
Bills-McGaugh Funeral Home & Crematory is in charge of the arrangements.
To order memorial trees in memory of Dorothy Buttrey, please visit our tree store.