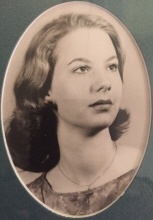 Ruth Louise Cochran, age 75 passed away on February 28, 2017 in the Alive Hospice Facility in Nashville, TN. She was a Marshall County, TN native born in 1941 to the late Orville Nathaniel and Margaret Ruth Leonard Baxter. She was also preceded in death by her stepmother, Lucille "Lucie" Leonard Baxter who raised her after her mothers untimely death.
Mrs. Cochran graduated from Marshall County High School in 1959. She met a local boy, Wayne Cochran (MCHS Class of 1957) after her graduation and they were married in 1960. Wayne was a Vietnam War Veteran serving in the US Navy (1961-1981 Retired Chief) and they traveled with their children living around military establishments including: Brunswick, Georgia, Memphis (Millington), TN, Alameda (San Francisco Bay) CA, Denver, CO, Rota, Spain, Virginia Beach, VA and then retired to Lewisburg. Later they moved to Petersburg, TN in 1981 settling on the "Chestnut Ridge Farm" on the Moore, Lincoln, Bedford, Marshall Co. line on the Elk Ridge. They restored the 1890s farm house with acreage which is a registered "Century Farm".
Ruths first job was working in the brand new Life and Casualty Building, Nashvilles first skyscraper. She retired from the Marshall County Board of Education as a teachers aid in Special Education with 24 years of service. Mrs. Cochran was a member of the First United Methodist Church in Petersburg, TN, the Petersburg Garden Club, the Marshall Co. Historical Society, and was previously a Librarian in Petersburg, TN.
She was preceded in death by her husband, Wayne in 1997. She is survived by her children, Lisa Cochran Martin, Murfreesboro, TN, Troy Cochran, Dallas, Georgia and five grandchildren, Aaron Martin, Bedfordshire, England, Cooper and Abbey Martin, Murfreesboro, TN, and Kelsey and Trevor Cochran, Dallas, Georgia.
Visitation with the family will be Friday, March 3, 2017 from 6:00 PM until 8:00 PM at the Petersburg First United Methodist Church located at 107 Church St. in Petersburg, TN. Visitation will be again on Saturday, March 4, 2017 at 2:00 PM in the Chapel of Bills McGaugh Funeral Home with the Funeral Service to be held at 3:00 PM. Burial will follow in the Lone Oak Cemetery.
In lieu of flowers memorials may be made to the Smyrna Middle School Library, 712 Hazelwood Drive, Smyrna, TN 37167, First United Methodist Church, P. O. Box 56, Petersburg, TN 37144, and the Marshall County Historical Society, c/o Linda Potts, 506 Highland Avenue, Lewisburg, TN 37091.
Notes of condolences may be sent to www.billsmcgaugh.com.
Bills McGaugh Funeral Home and Crematory is assisting the family with the arrangements.
To order memorial trees in memory of Ruth Louise Baxter Cochran, please visit our tree store.