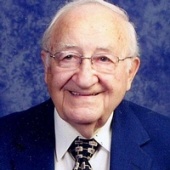 William Hardison Hendrix, 93, of Panama City, passed away on Thursday, December 13, 2018 in his home.

He was born December 5, 1925 in Lewisburg, Tennessee. He served in the United States Navy during World War II. He was a retired optometrist. He was preceded in death by his wife, Margaret Elizabeth Hendrix.

He is survived by a son, Don Hendrix (Eady); two grandchildren, Shannon Pugh, Miles Hendrix; three great grandchildren, Mary Margaret, Kain, Ivory and his caregivers, William & Desiree Polmear. Funeral services will be held on Sunday at 2 p.m. at Wilson Funeral Home in Panama City, Florida. The family will receive friends at the Wilson Funeral Home on Sunday from 1:30-2 p.m. prior to the service. Graveside services will be held on Wednesday at 1 p.m. in the Lone Oak Cemetery, Lewisburg, TN. In lieu of flowers, the family request that memorial donations be made to Covenant Hospice, 107 W. 19th St., Panama City, FL 32405.

Condolences may be extended online at www.billsmcgaugh.com
To order memorial trees in memory of William Hardison Hendrix, please visit our tree store.