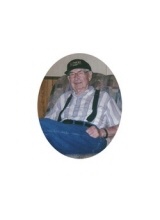 A native of Marshall County, He was the son of the late Florence Cozart Ervin and Archie Ervin. He was retired from Eaton Corporation in Shelbyville, served his country in the United States Army and was of the Baptist faith.

In addition to his parents, his wife, Martha Frances Ervin who passed in 2011, a grand daughter Jeannie Ray Lindsey and a great grandchild Shane Lindsey, along with one brother, Claudie Ervin precedes him in death.

Funeral Services for Mr. Ervin will be conducted on Saturday, September 8, 2012 at 2:00 PM from the chapel of Bills McGaugh Funeral home; burial will follow in Lone Oak Cemetery with Military honors. Thomas B. Sumners officiating.

You may send condolences of sympathy to the family at www. billsmcgaugh.com.
To order memorial trees in memory of William Ervin, please visit our tree store.