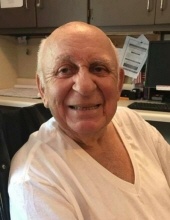 Born on September 20, 1936 in Lawton, Michigan, he was the son of the late William E. Overacker, Sr. and the late Lena Mae Bennett Overacker. He proudly served in the US Army and was a retired engineer for General Motors. Bill was a devoted family man. Mr. Overacker attended New Life Church.

Survivors include his daughters, Kris (Brian) Hawes of Lewisburg, Penny Miller of Michigan; four grandchildren; two great-grandchildren; mother of his children and former wife of over 30 years, Diana Deiwert.

In addition to his parents, he is preceded in death by a son, William E. Overacker, III.

Bills-McGaugh & Hamilton Funeral Home & Crematory is honored to be assisting the family with cremation arrangements. Condolences may be offered online at www.billsmcgaugh.com.
To order memorial trees in memory of William E. Overacker, Jr., please visit our tree store.