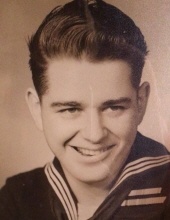 Thomas Carl Stevenson, 85, resident of Lewisburg, died on Tuesday, November 24, 2020 at his residence.
Funeral services will be conducted on Friday, November 27th at 1:00 PM at Bills-McGaugh & Hamilton Funeral Home with Pastor Matt Judd officiating. Burial will follow in Short Cemetery. The family will visit with friends on Friday from 11 AM until service time at the funeral home.
Born on February 22, 1935 in Giles County, he was the son of the late John and Martha Stevenson. He joined the US Navy at the age of 17, and served during the Korean War. Thomas was a longtime sheet metal worker, and a proud member of the Sheet Metal Workers Union 177.
Survivors include his sons, Terry (Vicki) Dillard of Lewisburg, Billy (Shieleen) Beach of Nashville; daughter, Sandy (Ronnie) Wilson of the Farmington community; sister, Rebecca Minatra of Memphis; six grandchildren and eight great-grandchildren; and several nieces and nephews.
In addition to his parents, he is preceded in death by his wife, Bertha Lee Stevenson; sister, Jane Stevenson; brother, Logan Stevenson; son, Randy Dillard; and brother-in-law, Bob Minatra.
Bills-McGaugh & Hamilton Funeral Home is honored to assist the family with arrangements. Condolences may be offered online at www.billsmcgaugh.com.
To order memorial trees in memory of Thomas Carl Stevenson, please visit our tree store.