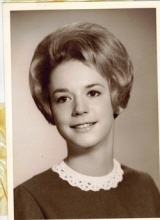 Susan Garbade Hooten,age 67 of Cornersville, Tn, passed away Thursday, October 8, 2015 at Vanderbilt Medical Center. Mrs. Hooten spent most of her years as a teacher in Texas,later moving to Marshall County, Tn. where she finished her teaching career. Susan was a member of The Republican Women and Daughters of American Revolution.
Mrs. Hooten is the daughter of the late Donald Garbade and Priscilla Montage Garbade. She is also preceded in death by her husband,Jim Hooten who passed away in 2008.
Mrs. Hooten is survived by a daughter,Taryn (John Paul) Riner of Cornersville, son, Douglas Hooten of Cornersville,2 grandchildren ,Courtney Arnold and Grayson Riner; sister,Sandy Rainey of Houston, Texas and several nieces and nephews.
Funeral mass will be held Monday,October 12,2015 at 1pm at St. Johns The Evangelist in Lewisburg, Tn. with entombment to follow in Sunset Park. Visitation will be Sunday, October 11,2015 ,3 to 6 pm. in the chapel at Bills McGaugh Funeral Home.
In lieu of flowers, donations may be given to St. Jude Childrens Research Hospital,P.O. Box 1000 Dept 142, Memphis,Tn 38101-9908
You can sign the online registry at www.billsmcgaugh.com
To order memorial trees in memory of Susan Hooten, please visit our tree store.