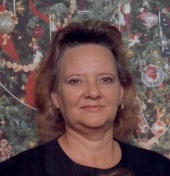 Sharon A. Martin, age 61, passed away on Friday, July 6, 2018 at Marshall Medical Center in Lewisburg, TN. She was born on April 13, 1957 in Marshall County to the late Willie Andy Wright and Mary Ann Eakes Pruitt, who survives. Ms. Martin's favorite past time was cooking.

Visitation with the family will be on Monday, July 9, 2018 from 4:00 pm until 8:00 pm in the chapel of Bills-McGaugh & Hamilton Funeral Home. The funeral service will be on Tuesday, July 10, 2018 at 2:00 pm in the chapel with burial in Round Hill Cemetery in Belfast, TN. Brother Wade West and Brother Phil Shephard will be officiating. Pallbearers are Joel Jones, Bo Jones, Elias Espejo, Jim Williams, Kevin Williams, Josh Wells, and Bradley McDonald.

Condolences may be sent to the family at www.billsmcgaugh.com.

Bills-McGaugh & Hamilton Funeral Home & Crematory is assisting the family with their arrangements.
To order memorial trees in memory of Sharon A. Wright Martin, please visit our tree store.