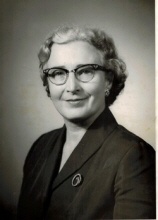 Biography Sarah Allen Ferguson Nelson, age 99 of Rich Creek Community, passed away Tuesday, December 31, 2013. Mrs. Nelson was born December 1, 1914 at her parent's Homeplace in the Rich Creek Community.. A resident of West Tennessee for the past 8 years, Mrs. Nelson was the daughter of the late James Franklin and Mary Eunice Langley Allen Ferguson. She was preceded in death by her husband, Jack Rucks Nelson, and her sister Mary Margaret Ferguson Nutt. She was a member of the Clay Hill United Methodist Church , both an historic church and cemetery marked by The Sir Hugh Bullocke Chapter, Colonial Dame XVII Century of which she was a charter member. She received her undergraduate teaching degree from Peabody College for Teachers and her graduate degree from The University of Tennessee at Knoxville. She was a much loved retired teacher of Forrest High School in Chapel Hill.
She is survived by two nieces, Margaret O'Neal Nutt and Amelia Churchwell Nutt Armstrong of Rich Creek Community, two great nieces, Mary Margaret Moore of Murfreesboro,TN and Catherine Betts Wright, of Humboldt,TN and one great, great niece, Lauren O'Neal Betts of Humboldt,TN.
Funeral Services for Mrs. Nelson will be conducted on Saturday, January 4, 2014 at 10:00 A.M. at the Clay Hill United Methodist Church. Burial will follow in the Mt. Vernon Cemetery in Albertsville, Alabama.
Visitation with the family will be on Friday, January 3rd from 5:00 P.M. until 8:00 P.M. at the church.
To order memorial trees in memory of Sarah Nelson, please visit our tree store.