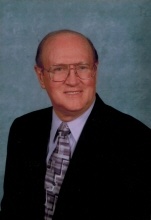 Rev. Samuel D. Phipps, age 80 of Lewisburg, TN went to be with the Lord on Tuesday, October 18, 2016. He was born August 16, 1936 in Logan, West Virginia to the late John and Frances Phipps. He was preceded in death also by a brother, Alfred Phipps.
He began preaching at age 16 and was the pastor of churches in West Virginia, Kentucky and Tennessee until his retirement in 1998. He was a graduate of Trevecca Nazarene University. He was the pastor of the Lewisburg Church of the Nazarene for 5 years and was a member of the Shelbyville First Church of the Nazarene. He loved the Lord and devoted his life to spreading the Word of God.
He is survived by his loving wife of 56 years, Joyce; a son, John (Sandra) Phipps of Lewisburg, TN; a daughter, Gina (Bob) Johnson of Cornersville, TN; two sisters, Alice Thomas, Huntington, WV, Patricia Alley, Proctorville, OH; two grandchildren, Deanna Phipps, Scott Phipps, two step-grandchildren, Allison Veron, Brianna Davis; two step-great-granddaughters, and several nieces and nephews.
The family will have a private burial at Sunset Park, Lewisburg, TN with Rev. Ron DeWitt officiating. No prior visitation is planned.
A Home-Going Celebration will be held at First Church of the Nazarene in Shelbyville, TN on Sunday, October 23, 2016 at 5:00 PM.
In lieu of flowers donations may be made to The Least of These Fund, c/o First Church of the Nazarene, 834 Union Street, Shelbyville, TN 37160.
Notes of sympathy may be sent to the family at www.billsmcgaugh.com.
Bills McGaugh Funeral Home and Crematory is in charge of the arrangements.
To order memorial trees in memory of Samuel D. Phipps, please visit our tree store.