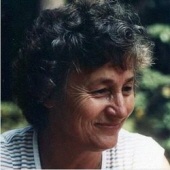 Biography
Rosa G Mueller, age 80 of Lewisburg, passed away on Saturday, January 31, 2015 at her residence. She is the daughter of the late Franz and Anna Glaub. She was preceded in death by one brother Mathias Glaub.
She is survived by her husband of 63 years, Guntmar [John] Mueller, 4 sons: Thomas Mueller of St Johns Island SC, David Mueller, La Habra, CA, James Mueller Hagerstown, MD and Daniel Mueller Gray Court, SC. 2 Daughters: Franziska Turrell, Damascus MD & Hannah Floyd, Lewisburg TN. 1 Sister Anna Glaub, Buffalo NY; 10 grand children, 2 great grand children and several nieces and nephews.
A native of Hungary Mrs. Mueller and her husband emigrated to the US in 1952 post WWII where they worked in AL as sharecroppers eventually moving to Buffalo NY where she and her husband became Jehovah's Witnesses in 1957. She moved with her family to VA then to MD finally settling in Lewisburg TN in the mid 80's. Her main focus in life was to remain close to Jehovah God, be a good wife and mother and help others understand God's purpose for mankind as revealed in the bible.
A Memorial service will be held at the Kingdom Hall of Jehovah's Witnesses 1038 War Eagle Dr, Lewisburg TN Saturday February 7, 2015 at 1:00 p.m. In lieu of flowers, donations can be made to the Lewisburg Congregation of Jehovah's Witnesses; PO Box 1023 Lewisburg, TN 37091
To order memorial trees in memory of Rosa Mueller, please visit our tree store.