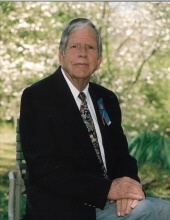 Robert P. “Bob” Hopkins, III was born February 16, 1939. He was a lifelong resident of Marshall County, the son of Robert Preston Hopkins, Jr. and Anne Wagnon. Bob attended Castle Heights Military Academy in Lebanon, TN before joining the US Air Force. He was stationed in Fort Worth, TX and served in Turkey where he was a member of the munitions maintenance squad for five years. He married Carolyn Jane Langham of Calera, OK on July 13, 1962 in Fort Worth, TX. After an honorable discharge from the military in December 1962, they moved back to Lewisburg to raise their family. Bob owned and operated the local family business, Nora Mills Feed manufacturing.
He was proud to serve his community in a variety of ways. He began as a Civil Defense volunteer in 1961. He later certified as a Haz-Mat Technician, Extraction Technician, Hazard Assessment Technician and EMT. On October 1, 1988 he became the Marshall County Emergency Management Agency Director where he served until his retirement in 2015.
He had a passion for assisting local communities in establishing volunteer fire departments throughout the county. If there was an emergency he was on the scene. He would bring the tanker and radio ahead with his distinct voice saying “tanker in route” when there was a fire in Marshall County. He worked tirelessly to get the Code Red Storm alert established in the county. He often worked through the night watching the radar in order to protect the residents, his friends, of Marshall County. During his tenure as the Emergency Management Agency Director he took and taught hundreds of hours of classes in preparedness, response, recovery and mitigation. Some of the classes he taught included: Cert and First Responder Classes, Vanessa K. Free Class, 300 & 400 Nims Classes, Fire Fighter Classes, Hazardous Materials Accident Response, just to name a few. He spent many hours preparing and participating in multi-county mass casualty preparedness drills. In October of 2010, he received the EMAT Achievement Award--the highest honor awarded by the Tennessee Emergency Management Agency. He was also given the Marshall County Citizen of the Year Award in 2010. He spent 54 years on call twenty four hours a day for all Fire Response, Hazmat Response and Search and Rescue operations. He was always ready and willing to go the extra mile for the safety of the community. Additionally, Bob was a fifty year member of the 32⁰ Scottish Rite Masons and was an Al Menah Shriner.
At the time of his death, he was serving as a county commissioner in Marshall County. He was a longtime member of First Baptist Church in Lewisburg. He was also an active member of the 911 board where he served for 35 years. He loved to fish, swim, and boat; loved people and listening to their stories and was always ready with a joke and a smile or laugh. He loved his family and particularly enjoyed the yearly gathering of the Langham crew.
He is preceded in death by his father, Robert Preston Hopkins, Jr. and mother, Anne Wagnon; and two sisters, Marcie Ann Hopkins Walls and Caroline Hopkins Hill.
He is survived by: Carol Hopkins (wife); son Robert Preston (Bobby) Hopkins IV (Leslie) of Smyrna, TN; daughter Cathleen (Cathey) Hopkins McCullum (Larry) of St. Augustine, FL. Granddaughter-Carolyn Jane (Caly) McCullum of St. Augustine, FL, and grandson Zachary Wyatt Coleman of Smyrna, TN. Sister-in-law Carmeta McKnight of Calera OK; Brothers-in-law Douglas Langham of Olethe, KS; Donald Langham of Houston, TX; Jack Langham of Calera, OK and Tommy Hill of Mooresville, TN. In addition he leaves many beloved nieces, nephews, cousins and friends.
Visitation with the family will be Friday, September 17th from 5:00-7:00pm at First Baptist Church of Lewisburg. There will be a short period of visitation on Saturday, September 18th at 10:00am followed by the funeral service at 11:00am at First Baptist Church, 323 North 2nd Avenue; Lewisburg, TN 37091.
Pallbearers: Brad McKnight, Preston McKnight, Robert Collier, Woodson Carter, Bob Edens, Linda Haislip
Honorary pallbearers include volunteer and professional firefighters of Lewisburg and Marshall County and members of the 911 Board.
Donations in memory of Bob can be made to First Baptist Church, Lewisburg, the Rural Fire Departments of Marshall County, or a charity of your choice.