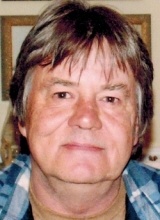 Robert Bob Howard Johnson, Jr., age 67 of Lewisburg, passed away on Wednesday, March 18, 2015 at his residence. A native of Ardmore, OK, Mr. Johnson was the son of the late Robert Howard Johnson and Mary Frances Stufflebeam Johnson. Mr. Johnson was owner and operator of Belfast Feed Mill and a member of the Baptist faith, and he served his country in the United States Army.

Visitation with the family will be Friday, March 20, 2015 from 4 PM until 7 PM in the chapel of Bills-McGaugh Funeral Home. Following visitation, Mr. Johnson will be conveyed to Craddock Funeral Home, 525 S. Commerce, Ardmore, OK 73401. Burial to take place on Wednesday, March 25th at Rose Hill Cemetery.

Bills-McGaugh Funeral Home & Crematory is in charge of the arrangements.
To order memorial trees in memory of Robert Johnson, Jr, please visit our tree store.