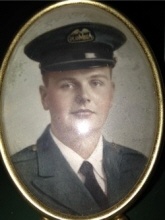 In the years following his military service, Mr. Crutcher worked as a salesman for Woodward Motor Company and also was employed by the Lewisburg Tribune.

There are no immediate survivors.

A graveside service for Mr. Crutcher will be held Wednesday, September 24, 2014, at 9 AM in Lone Oak Cemetery, with military honors.

There will be no visitation prior to the service.

Bills-McGaugh Funeral Home & Crematory is in charge of the arrangements.
To order memorial trees in memory of Robert Crutcher, III, please visit our tree store.