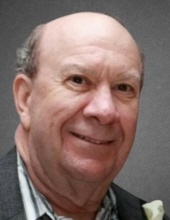 Born on July 5, 1945, in Belleville, IL, he was the son of the late Earl James and the late Frances Skidmore James. Bob was a retired employee of the Saturn plant, and he later drove cars around for Lyons Ford. He was a bowling fanatic, and also enjoyed camping and traveling. Bob was the manager of USBC for 18 years and volunteered with American Red Cross for several years. He was a member of the Signal Hill,IL Volunteer Fire Department and Millstadt Crusaders drum and bugle corps for many years.

Funeral services will be conducted on Saturday, January 29th at 11:00 AM at Bills-McGaugh & Hamilton Funeral Home. Burial will follow in Lone Oak Cemetery. The family will visit with friends on Friday, January 28th from 4:00 pm until 7:00 pm.

Bills-McGaugh & Hamilton Funeral Home is honored to assist the family with arrangements. Condolences may be offered online at www.billsmcgaugh.com.
To order memorial trees in memory of Robert "Bob" James, please visit our tree store.