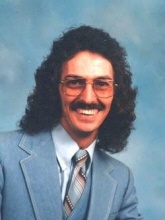 Mr. Ricky Howard Spencer, age 58 of Lewisburg, passed away on Friday, February 6, 2015 at Maury Regional Medical Center.
A native of Marshall County, he was the son of the late Virgil Spencer and Dora Hargrove Spencer. He was a former employee with Walker Die Casting.
In addition to his parents, he is preceded in death by a brother, Jerry Wayne Hargrove.
He is survived by three sons; Gary ( Andrea) Spencer of Shelbyville, Blaise (Marlana) Spencer of Murfreesboro and Brock (Jenna) Spencer of Lewisburg. Two brothers; Donnie ( Frances) Spencer and Rocky ( Dawn) Spencer both of Lewisburg. Two grandchildren; Levi and Karli and several nieces and nephews also survive.
Visitation for Mr. Spencer will be on Sunday, February 8, 2015 from 2:00 P.M. until 6:00 P.M. at Bills-McGaugh Funeral Home. No services are planned.
To order memorial trees in memory of Ricky Spencer, please visit our tree store.