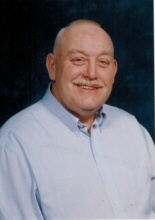 Ralph E. Hall, age 73 of Lewisburg, passed away on Monday, February 17, 2014. A native of Goodrich, Michigan, Mr. Hall was the son of the late Eugene Hall and Laura Burton Hall. He served his country with the United States Air Force during the Vietnam War, retired from General Motors, retired fire chief of Five Points Fire Department, a member of the South Marshall Fire Department, and was a member of the Forty & Eight, which is an elite part of the American Legion. In addition to his parents, he was preceded in death by a brother, Ray Hall and a grandchild, J. T. Music.

Funeral services for Mr. Hall will be Wednesday, February 19, 2014, at 11 AM from the Chapel of Bills-McGaugh Funeral Home with military honors. Burial will follow in Gills Chapel Cemetery in Lewisburg. Visitation with the family will be Tuesday, February 18, 2014, from 3 PM to 7 PM at Bills-McGaugh Funeral Home and again on Wednesday starting at 10 AM.

In lieu of flowers, please make donations to the Wounded Warrior Project.

Bills-McGaugh Funeral Home & Crematory is in charge of the arrangements.
To order memorial trees in memory of Ralph Hall, please visit our tree store.