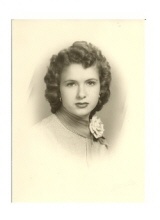 Pollye Taylor Hundley, age 82 of Lewisburg passed away on Wednesday, February 06, 2013 at Marshall Medical Center. A native of Guthrie, KY, Mrs. Hundley was the daughter of the late Milos G. Davis and Bessie Craft Davis. In addition to her parents, eight brothers and sisters and her first husband Dr. William L. Taylor preceded her in death.

She was a retired Hospital Administrator/Office Manager and a member of lst Assembly of God in Lewisburg.

Funeral services for Mrs. Hundley will be Saturday, February 9th, 2013 at lst Assembly of God at 2:00 P.M. with William L. Taylor II officiating. Burial will take place in Lone Oak Cemetery. Visitation with the family will be Friday, February 8th, 2013 from 4 P.M. to 8 P.M. at Bills-McGaugh Funeral Home and one hour prior to the funeral service at the church.

In lieu of flowers, memorials are encouraged to the lst Assembly of God or Cornersville United Methodist Church.
To order memorial trees in memory of Pollye Hundley, please visit our tree store.