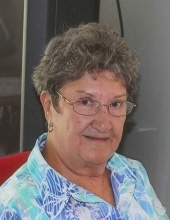 Peggy Joyce Gray, 83, of Lewisburg Tennessee passed away at Maury County Regional Hospital on September 3, 2018 after a brief battle with cancer.

Peggy was born on October 14, 1934 in Robjohn, Alabama and spent her early childhood in Chickasaw and Mobile, Alabama. She has lived in Lewisburg since 1977 and worked at the Methodist Daycare Center and at Connelly Middle School in the cafeteria for many years. Peggy was an active member of the First Assembly of God of Lewisburg. She enjoyed relaxing at the beach, traveling throughout the USA with her husband, spending time with family, and aerobics with her friends.

Visitation with the family will be held on Thursday, September 6, 2018 from 4:00 pm until 8:00 pm in the chapel of Bills-McGaugh & Hamilton Funeral Home, 755 Yell Road, Lewisburg, TN. The funeral service will be held on Friday, September 7, 2018 in the same location beginning at 1:00 pm with Don McCullough and Shaun Grant officiating. Burial will follow in Sunset Park. Pallbearers serving are Matt Gray, Robert Dale Gray, Richard Gray, Paul Gray, Will Gray, and Andrew Gray with honorary pallbearers being Michael Gray, Storm Gray, Slate Gray, and Houston 'Junior' Watkins.