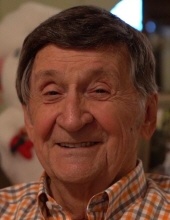 Paul Woodford, 90, former pastor of Lewisburg First Baptist Church and resident of Chapel Hill, went to be with his Lord and Savior on Sunday, August 8, 2021, surrounded by his loving family.

Born on January 9, 1931, in Savannah, Tennessee, he was the son of the late Samuel Woodford and the late Dollie Sharp Woodford. He served his country for two years with the Army. Brother Paul graduated from Union University and was a longtime beloved Baptist pastor. He served as pastor of Ripley First Baptist Church from 1972-1981. In 1981, he began his tenure at Lewisburg First Baptist Church, until his retirement in 1993. Paul devoted his life to serving others and the community. He had a great love for traveling and for serving his congregation and his community.

In addition to his parents, he is preceded in death by his son, Jeffrey Paul Woodford, and brothers, Ed Woodford and Howard Woodford.

BILLS-MCGAUGH & HAMILTON FUNERAL HOME is honored to assist the Woodford family with arrangements. Condolences may be extended online at www.billmcgaugh.com.
To order memorial trees in memory of Paul Woodford, please visit our tree store.