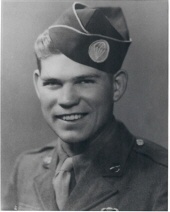 In addition to his parents, he is preceded in death by his wife, Cynthia M. Jackson; son, Jerald Jackson and his daughter, Ginger Jackson.

Funeral services will be conducted Wednesday, June 5, 2019 at 4:00 at Bills-McGaugh & Hamilton Funeral Home. Burial will be Friday, June 7, 2019 at 11:00 in Suncrest Memorial Gardens in Moultrie, Georgia. The family will visit with friends Wednesday from 11:00 - 4:00 at the funeral home.

Paul was born March 8, 1923 in Funston, Georgia, he was the son of the late Dennis Jackson and the late Florence Carter. His dad worked in a packing house which failed during the depression. His dad had a large bee farm, after the war. Paul enlisted in the military at age 17. He received his basic training at Ft. Benning, GA. Paul was first stationed at Fort Knox in KY, guarding the gold depository and as fill in driver for General George S. Patton. He also built hives and rounded up troublesome bees for General Patton.

After the Pearl Harbor attack, Paul transferred from Fort Knox, KY to Camp Beale in California. His orders were to stay there and guard the coast. That was not enough action for Paul. Staff Sergeant Jackson wanted more action, so he asked for a transfer to the Paratroopers. His captain did not want him to leave, so his request was denied. Staff Sergeant Jackson refused to accept that answer, so he contacted his former commander, General Patton expressing his desire to transfer. Shortly after, his request was granted, but his Captain stripped Staff Sergeant of his rank for leaving.

Private Jackson returned again to Fort Benning, this time for Parachute Training. He got his wings and continued training at Laurinburg-Maxton Army Air Base in North Carolina. Paul was promoted to Corporal Jackson, at age 21, was shipped out to Europe. He was stationed in North Ireland and then in Southern England.

In southern England, his training continued, preparing his division to jump into Normandy. The terrain was made to be as close to what they would encounter in Normandy and they jumped many times a day. Corporate Jackson and the others in his division were quarantined in camp to study sand tables, maps and instructions. His commanding officer was Colonel Howard R. Johnson, but the men called him Geronimo. The American Commanding General Eisenhower, who later became our 34th President, and British Prime Minister Winston Churchill, both spoke to the troops, shook soldiers hand and wished them well.

Paul and thousands of other soldiers boarded planes in the dark of the night and they all left together. Each outfit had a specific target and orders to follow. Corporal Jacksons target was the Barquet, a water way in Normandy. They bailed out just after midnight on June 5, 1944, and were there fighting throughout D-Day and included many battles in France over the next several weeks, before returning to England. His returning regiment received a seven day furlough, but after that, they would be quarantined again for more training. He received more promotions and earned his Staff Sergeant rank back.

A few weeks later, Staff Sergeant Jackson was a part of Operation Market Garden, led by British Commander General Montgomery. Their goal was to seize a key bridge to get the Germans out of Belguin. This opened the door to the Rhine River Valley and access into Germany. They were not successful. 10,000 paratroopers jumped and fount in this mission, but only 2,000 survived. Most were Polish or English, only a small percentage of Americans participated in this battle. The Americans, Including Paul, were commissioned to fight the Germans and win control of a windmill in Holland. It changed hands several times. It would be destroyed during the battles and then later rebuilt. It was a very important location, which both sides wanted for use as an observation post.

The British troops drove their leased Sherman Tanks in between the Germans in the valley and the Allied troops in the trees. The Germans were firing rocket launchers and hit one tank, which set it on fire. The explosion sent debris flying every direction. A piece of hot scrap metal landed on Pauls right middle finger and burnt it clear to the bone. He bandaged it the best he could, but couldnt just sit and nurse his wound

Paul decided to climb up the hill to get a better view of the Germans. He saw a German rocket launcher team, so Paul made his way into range and crawled into a hole.

Once in the hold he fired sixteen shots into the five German soldiers, killing then all and disabling the rocket launcher. Paul was recommended for an award for his bravery in this battle and was promoted to Master Sergeant. Paul also fought in the Battle of the Bulge, in Bastogne, Belgium. The objective was to seize control of the seven main roads, so Germans could not use them. All the troops fought hard. They won the roads and Bastogne. The Germans kept trying to win them back, but could not, so they surrounded the Allied troops. The news of being surrounded did not scare Master Sergeant Jackson and his fellow soldiers.

Paul was shot with three bullets into his hip joint and spent the next five months in the hospital. He received an honorable discharge from his 101st Airborne Military Service in 1945, after VE Day, shortly before World War II officially ended with VJ Day.
To order memorial trees in memory of Paul Jackson, please visit our tree store.