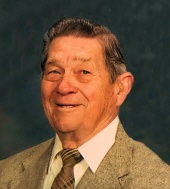 Odell Stanley Armour, age 93, went to his heavenly home on Thursday, January 18, 2018. He was born in Cave Springs, Kentucky and then grew up in Pembroke, Kentucky. In 1942 he joined the U. S. Navy serving during World War II and was awarded the Purple Heart for wounds received on D-Day in 1944. Mr. Armour loved his country and proudly served in the Navy for twenty years.

In 1945 he married Mary Isabelle Green. They were married for seventy-one years until her passing in 2017. They raised three children together. In 1980 Mr. and Mrs. Armour moved to Cornersville, TN. He worked as a security guard for Heil-Quaker for four years. He loved working around his farm and tending to his garden.

Mr. Armour was a long time member of Mt. Moriah Baptist Church. He enjoyed many social activities with his church friends.

Mr. Armour was loved by all who knew him. He will be remembered for his big smile, his sense of humor, and his kindness to others. He will be greatly missed.

Visitation with the family will be on Friday, January 19, 2018 from 4:00 pm until 8:00 pm in the Chapel of Bills-McGaugh & Hamilton Funeral Home. Ernie Farmer will be officiating the Funeral Service on Saturday, January 20, 2017 at 11:00 am with burial to follow in the Short Cemetery, Spring Place Community, Lewisburg, TN. The grandsons and nephews will serve as pallbearers.