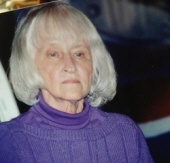 Funeral services will be conducted on Tuesday, February 17, 2015 at 12 Noon in the chapel of Bills-McGaugh Funeral Home. Visitation will begin that morning beginning at 10 AM until the funeral hour. Burial will follow in Lone Oak Cemetery.

Bills-McGaugh Funeral Home & Crematory is in charge of the arrangements.
To order memorial trees in memory of Nell Rogers, please visit our tree store.