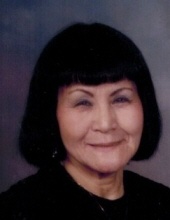 Mineko Sakamoto Burgess, age 87 of Lewisburg passed away on Friday, March 4, 2016 at Marshall Medical Center in Lewisburg, TN. A native of Kobe, Japan she was the daughter of the late Asaroku and Kinuko Miyazaki Sakamoto and the widow of the late James Byron Burgess who passed away in 1998.
Her survivors include three sisters who reside in Japan, Toshiko Suge, Tomoko Yamamoto and Akiko Naganuma. Her sister in law, Sudie B. Milam of Lewisburg and several nieces and nephews also survive.
Visitation will be held on Tuesday, March 8, 2016 from 4:00 PM to 8:00 PM in the chapel of Bills-McGaugh Funeral Home. A graveside service will be held on Wednesday, March 9, 2016 at 10:00 AM in the Diana Cemetery in Giles County.
In lieu of flowers donations may be made to Hospice Compassus,1412 Trotwood Ave., Suite 5, Columbia, TN 38401.
Notes of condolences may be sent to www.billsmcgaugh.com.
Bills McGaugh Funeral Home and Crematory is in charge of the arrangements.