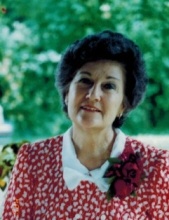 Maysene W. Henson, age 83 passed away on Sunday, February 12, 2017 at NHC Lewisburg. She was a Lewisburg native, born to the late Clyde Mayes Woodward and Martha Woodward Sadler.
Maysene was a graduate of Marshall County High School, worked as a professional secretary. She retired after a 28 year career as an office manager for the local cable company. She was a member of the Farmington United Methodist Church and was very devoted to the church and her family.
She is survived by her three children, Bill Henson, Columbia, TN, Monette (Doug) Fagan, Lewisburg, TN, Mary Beth Anderson, De Ridder, LA, two brothers, Barry (Ann) Woodward, Oak Harbor, WA, Randy Woodward, Lewisburg, TN, six grandchildren, Ben Henson, Allison (Chase) Stejskal, Jacob Anderson, Chance Anderson, Jody Fagan, and Tyler Anderson, and one great-grandchild, Elizabeth Anderson.
Visitation with the family will be held at Bills McGaugh Funeral Home on Tuesday, February 14, 2017 from 4:00 pm until 8:00 PM. The Funeral Service will be held in the Chapel of Bills McGaugh Funeral Home on Wednesday, February 15, 2017 at 11:00 AM with visitation two hours prior. Rev. Leland Carden will be officiating the ceremony. Burial will follow in Lone Oak Cemetery.
David Fagan, Chase Stejskal, Ike Wiggins, Jacob Anderson, Michael Watson, and Frank (Buck) Ward will be pallbearers. The family would like to express their appreciation to the members of the Farmington United Methodist Church along with The Staff and Caregivers of NHC - Lewisburg for their support, love and care for Mrs. Henson by being honorary pallbearers.
Memorials may be made to the Farmington United Methodist Church, c/o Jenny Jett, 0935 Snell Road, Lewisburg, TN 37091.
Notes of condolences may be sent to www.billsmcgaugh.com.
Bills McGaugh Funeral Home and Crematory is assisting the family with arrangements.
To order memorial trees in memory of Maysene Woodward Woodward Henson, please visit our tree store.