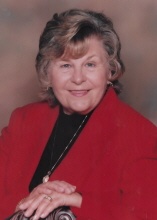 Mavis Arthell Finley, 85, passed away on Friday, October 19, 2018 at NHC Oakwood, Lewisburg TN. She was born in Boaz, Alabama on February 9,1933, to the late Willard and late Iris Phillips.

Visitation with the family will be Sunday, October 21, 2018 from 4:00PM to 7:00 PM and again Monday, October 22, 2018 from 10:00AM to 11:00AM. The funeral service will immediately follow the visitation on Monday at 11:00AM with Reverend Leland Carden officiating. Interment will be in Short Cemetery.

Notes of sympathy may be sent to the family at www. billsmcgaugh.com
Bills-McGaugh & Hamilton Funeral Home & Crematory is assisting the family with arrangements.
To order memorial trees in memory of Mavis Arthell Finley, please visit our tree store.