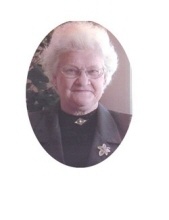 Mrs. Mary Eudora Warren, age 86 of Lewisburg, passed away from an extended illness on May 4, 2011 at her residence.

A native of Marshall County, she was the daughter of the late Lessie Lee Burgett Haislip and Austin Haislip. She was a retired employee for Cosmolab Cosmetics and a member of Lifesong Family Church.

In addition to her parents, she is preceded in death by her husband of 65 years, Leon Warren (2008) and two brothers, Kenneth Lloyd Haislip and Clayton Franklin.

Funeral services for Mrs. Warren will be conducted on Saturday, May 7, 2011 at 2:00 PM from Lifesong Church with Reverend Rocky Cunningham, Reverend Richard Bradford, and Reverend Phillip Bennett officiating. Burial will follow in Lone Oak Cemetery.

In Lieu of flowers donations can be made to Hospice Compassus , 1412 Trotwood Ave. Columbia, TN 38401.
To order memorial trees in memory of Mary Warren, please visit our tree store.