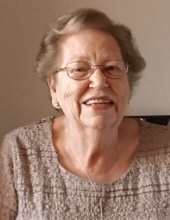 Mary was a long time member of the First Baptist Church of Lewisburg. Mary passed from this earth on June 29th, 2021. She will be missed by all.