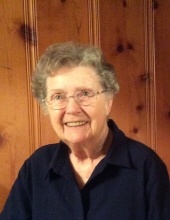 Mary Barbara Zumbro passed away on Thursday, January 20, 2022, at Oakwood in Lewisburg, TN at the age of 98.

Funeral services will be held on Saturday, January 22, 2022, beginning at 1 p.m. in the chapel of Bills-McGaugh and Hamilton Funeral Home in Lewisburg, TN with Dr. Tom Dumser officiating. Burial will follow at Lone Oak Cemetery. Visitation will be held from 11 a.m. to 1 p.m.

Barbara was born November 19, 1923, in Portland, TN to the late Charles E. and Louise Bunch Kerley. She graduated from Blue Mountain College and earned her master’s degree from MTSU. Her teaching career began with homebound teaching and in 1st grade at Hardison School. She became principal at Hardison School and later Marshall Elementary. Barbara was a member of the First Baptist Church.

Family suggests masks to be worn.