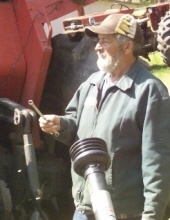 Graveside services will be conducted on Tuesday, July 28th at 11:00 AM at Bryant Cemetery with military honors provided by the United States Army.

Born on February 17, 1945 in Pulaski, Tennessee, he was the son of the late Marvin and Daisey Rowe. He was a retired truck driver and farmer. Paul served in the United States Army during Vietnam.

In addition to his parents, he is preceded in death by sisters, Marie Carter, Orlean Foster, and brothers, Dean Rowe, Wayne Rowe, Roy Rowe, Johnny Rowe.

BILLS-MCGAUGH & HAMILTON FUNERAL HOME is honored to assist the family with arrangements. Condolences may be extended online at www.billsmcgaugh.com.
To order memorial trees in memory of Marvin Paul Rowe, please visit our tree store.