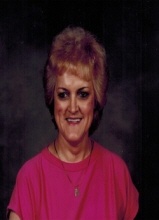 Martha Thompson Nunn, age 77 of Lewisburg, TN passed away on Saturday, March 15, 2014 at her residence. A native of Kellysville, WV, Mrs. Nunn was the daughter of the late Rastus Thompson and Lida Hill Thompson. She was also preceded in death by five sisters and three brothers. She was retired and a member of Belfast Baptist Church.

A memorial service for Mrs. Nunn will be Monday, March 17, 2014, at 7 PM at Belfast Baptist Church with Chester Slayton officiating. Visitation with the family will be Monday, March 17, 2014, from 5 PM to 7 PM at the church. A graveside service will be held Thursday, March 20 at 11 AM Eastern time in New Zion Cemetery in Oakvale, WV. Visitation will be held on Wednesday, March 19, 2014 from 6 PM until 9 PM Eastern time at Freda King Funeral Home in Oakdale, WV.

In lieu of flowers, the family requests donations to be made to St. Judes Childrens Hospital.

Bills-McGaugh Funeral Home & Crematory is in charge of the arrangements.
To order memorial trees in memory of Martha Nunn, please visit our tree store.