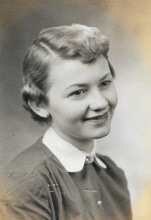 Martha was known as a strong willed and independent woman, but most importantly her "spit fire" personality. While attending Marshall County High School, she was Captain of the Tigerettes basketball team. Martha was never one to back down from a challenge, spending many hours working on the family farm. She served as the former head of the Democratic National Party, and as a Cub Scout leader of both the boy and girl scouts. She was a longtime devoted member of Cornersville Church of Christ. Martha lived a life time of adventures and experiences, some of which would have made a wonderful book.

A Funeral Service will be conducted Friday at 3:00P.M. in the chapel of Bills-McGaugh & Hamilton Funeral Home with Brother Jimmy Jean officiating. The family will visit with friends Friday at 12:00 P.M. until service time at the funeral home. Burial will follow in Davis-Moore Cemetery.