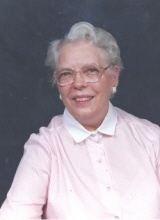 A native of Hickman County, she was the daughter of the late Nissie L. Bradley and John Groves England. She and her husband owned a dairy farm in Campbellsville, was a homemaker and a member of the Antioch Church of Christ.

In addition to her parents, she is preceded in death by two brothers, Frank England and Olon England along with a brother in law, Gene Parrish.

Funeral services for Mrs. Tomlinson will be conducted on Saturday, March 3, 2012 at 2:30 PM from the chapel of Bills McGaugh Funeral Home, with burial to follow in Sunset Park Cemetery.

In lieu of flowers donations can be made to Potter's Children's Home: Care of: Antioch Church of Christ, 4415 Old Sowell Mill Pike, Columbia, TN 38401.
To order memorial trees in memory of Marie Tomlinson, please visit our tree store.