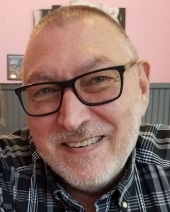 Malcolm “Mack” Sidney Wright, Jr., 60, resident of Lewisburg, died on Monday, June 14, 2021, at his residence surrounded by his loving family.

A funeral service will be conducted on Wednesday, June 16th at 2 PM at Bills-McGaugh & Hamilton Funeral Home. Burial will follow in Lone Oak Cemetery. The family will visit with friends on Wednesday from 11 AM until service time at the funeral home.

Born on May 18, 1961, in Lewisburg, he was the son of the late Malcolm Sidney Wright, Sr. and the late Martha Shelton Wright. He was a 1979 graduate of Forrest High School. Mack was a 40 plus year employee of Walker Die Casting, and for several years was a truck driver. He was an avid gun enthusiast, enjoying gun shows and ammunition. Mack was a war history buff, especially World War II. He enjoyed eating out at restaurants, but his go to place was the Tennessean Truck Stop. Above all, he loved his grandchildren, great-grandchildren, nieces, and nephews greatly.

In addition to his parents, he is preceded in death by his wife, Susan Wright.

The family wished to express their appreciation to Cheyanne Helton and Tyler Rogers for taking such great care of Mack during his illness.