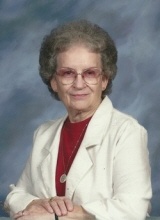 A native of Giles County, she was the daughter of the late Lellar Mae Bailey Owens and William Clarence Owens.. She was retired from Cosmolab Cosmetics Corporation and was a member of the Farmington Baptist Church.

In addition to her parents, her husband, Willie Alton Hazlett, and two brothers, Fred Owens and John Owens precede her in death.

Funeral services for Mrs. Hazlett will be conducted on Wednesday, February 13, 2013 at 1:00 PM from the chapel of Bills McGaugh Funeral Home with Wayne Cable officiating. Burial will follow in Lone Oak Cemetery.

Visitation with the family will begin on Tuesday, February 12, 2013 from 5:00 PM until 8:00 PM at the funeral home and one hour prior to the service on Wednesday.