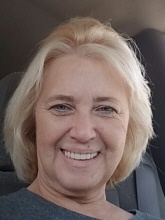 Linda Gail Taylor Hamilton of Lewisburg, TN passed away Saturday, January 14, 2017 at Marshall Medical Center in Lewisburg, TN. She was born to the late Robert "Tut" Taylor and Ella Lee Taylor on December 13, 1958 in Milledgeville, GA. Linda was a graphic designer for A Sign Shop.
She is survived by four brothers, Robert Taylor, Jr of GA, Mark Taylor of Nashville, TN, Lester Taylor of Omaha, Nebraska, and David Taylor of North Carolina, two sisters, Shirley Smith of GA, and Lou Ellen Bolan of Canada.
She is also survived by her extended family, Rick Dodson, Tara and Bryan Lashwood and Arianna "Izzie" Barnett all of Lewisburg, TN.
Ms. Hamiliton will be cremated and a memorial service held at a later date.
Notes of condolences may be sent to www.billsmcgaugh.com.
Bills McGaugh Funeral Home and Crematory is assisting the family with arrangements.
To order memorial trees in memory of Linda Gail Taylor Hamilton, please visit our tree store.