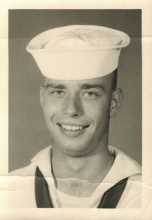 LeRoy Clair Veatch, age 76 of the Mooresville Community, passed away on Thursday, January 8, 2015 at his residence. A native of Denver, CO, Mr. Veatch was the son of the late Charles Veatch and Zoa Eilmann Veatch. Mr. Veatch was a nuclear engineer and was formerly employed with DCS in Franklin, a 32nd Degree Mason, member of PBA and Bass Masters, served his country for fourteen years with the United States Navy aboard the USS Howard W. Gilmore, CVA Shangri-LA Carrier, USS Enterprise Nuclear, CVA USS Saratoga during the Cuban Crisis, and heavy cruiser, USS St. Paul during the Viet Nam War, and was a member of the Episcopal Church.

He is survived by one son, LeRoy (Vicki) Veatch of Unionville; one daughter, Crystal (Ted) Rolof of the Mooresville Community; ten grandchildren, and five great-grandchildren.

A Memorial Service for Mr. Veatch will be held Sunday, January 11, 2014 at 7 PM in the Chapel of Bills-McGaugh Funeral Home with Mike Courtelis officiating. Visitation will be Sunday, beginning at 4 PM until the service hour.

In lieu of flowers, please make donations to The Freemasons' Grand Charity at www.grandcharity.org.

Bills-McGaugh Funeral Home & Crematory is in charge of the arrangements.
To order memorial trees in memory of LeRoy Veatch, please visit our tree store.