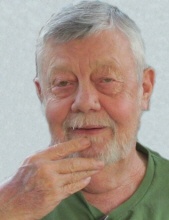 A Lewisburg native, he was born on July 14, 1942, to the late Henry Allen Johnsey and the late Ruby Lee Mayes Johnsey. He was retired employee of Inter City Products. Larry enjoyed woodworking and was known for his Halloween antics. He was married his beloved wife, Becky Sharp Johnsey, for fifty-eight years.

In addition to his parents, he is preceded in death by a brother, Thomas Wayne Johnsey.

In lieu of flowers, memorial may be made to St. Jude Children’s Research Hospital.

Bills-McGaugh & Hamilton Funeral Home is assisting the family with arrangements. Condolences may be offered online at www.billsmcgaugh.com.
To order memorial trees in memory of Larry A. Johnsey, please visit our tree store.