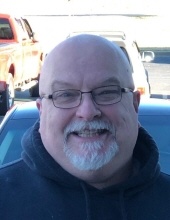 Kelly Ray Childers, age 58, of Lewisburg, passed away at Vanderbilt University Medical Center in Nashville, TN on January 30, 2022.
A Memorial Visitation will be held Friday, February 11, 2022 from 3-5pm in the chapel of Bills-McGaugh and Hamilton Funeral Home.
Kelly was born on October 14, 1963, in Charleston, West Virginia to the late John Walter Childers, Jr. and Betty Berry Childers. He was a minister for a period of time, and some say he continued his ministry through social media. He was employed by the State of Tennessee, Department of Safety and Homeland Security as a Safety Examiner. He loved his dogs, football and working out. He enjoyed playing his bass guitar and played with several bands through the years.
Survivors include sister, Teresa Childers; brother, Randy Childers; nephews and niece; and 4 dogs, Thor, Fiona, Buster and Sadie.
He is preceded in death by his parents.

Bills-McGaugh & Hamilton Funeral Home is honored to assist the family with arrangements. Condolences may be offered online at www.billsmcgaugh.com.
To order memorial trees in memory of Kelly Ray Childers, please visit our tree store.