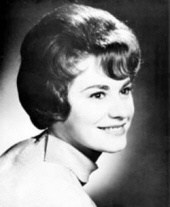 Mrs. Kay Kemmer Herbig, age 76 of Cornersville, Tennessee passed away on Monday, June 24, 2013, at her residence.

A native of Fargo, North Dakota, she was the widow of Robert William Herbig, who passed away in 2012 and she was a member of the Seventh Day Advent of Pulaski. She was preceded in death by her parents, Melvin Raver and Grace L. Kemmer Raver. Kay was a member of the famed WWVA Original Jamboree out of of Wheeling, West Virginia. She recorded for the Musicor label and was managed by the Mac Wiseman Talent Agency at one time.

A memorial service will be held on Sunday, June 30, 2013 at 1:30 PM at the New Haven Field House, 2213 South Linden Road, Swartz Creek, MI 48473. A potluck dinner will be held immediately following the service. You are welcome to bring a dish to pass.

You may send condolences of sympathy to the family at www.billsmcgaugh.com

Bills McGaugh Funeral Home & Crematory is in charge of the arrangements.
To order memorial trees in memory of Kay Herbig, please visit our tree store.