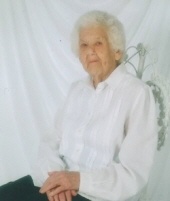 Katie May Sharp, age 102 of Lewisburg, passed away on Tuesday, September 15, 2015 at her residence. Mrs. Sharp was born in Williamson County Tennessee, the daughter of the late Sam and Elizabeth King. She was also preceded in death by her husband, Ramsey Sharp; two sons,Paul Sharp and James Sharp and a great grandchild, Cody Rice. Mrs. Sharp was of the Baptist faith.
She is survived by one son, Walter Claude Sharp of Lewisburg; two daughters, Mary Elizabeth Blackwell and Elaine Johnson,both of Lewisburg; nine grand children ,twelve great grandchildren and four great great grandchildren.
Funeral services will be held Thursday at 2pm in the chapel of Bills-Mcgaugh Funeral Home. Burial will be held in Lone Oak cemetery in Lewisburg, Tennessee.
Visitation will be held on Wednesday,September 16,4 to 8 pm and again 2 hours prior to the service on Thursday.
Condolences of sympathy may be sent to www.billsmcgaugh.com.
Bills-McGaugh Funeral Home & Crematory is in charge of the arrangements.
To order memorial trees in memory of Katie Sharp, please visit our tree store.