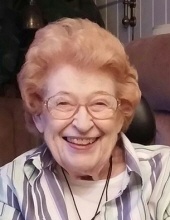 June Garrett Bond, age 91 passed away at her residence in Lewisburg, TN on May 7, 2017. She was born on June 3, 1925 to the late John Silas and the late Marcia Wetherby Garrett in Columbia, TN. June was a member of the Church Street Church of Christ and a retired secretary. She enjoyed her needlework and her family.
Mrs. Bond was also preceded in death by her husband of almost sixty years, Amos Cheatham Bond and a sister, Marcia Farrar. She is survived by two nieces, June Farrar of Dunnwody, Georgia, Marcia Farrar of Palm City, Florida and a nephew, John Farrar of Chattanooga, TN.
Visitation will be held at 11:30 AM on Wednesday, May 10, 2017 with a Funeral Service to be held at 3:00 PM the same afternoon in the chapel of Bills McGaugh Funeral Home and Crematory.
Notes of condolences may be sent to www.billsmcgaugh.com.
Bills McGaugh Funeral Home and Crematory is assisting the family with the arrangements.
To order memorial trees in memory of June Garrett Bond, please visit our tree store.