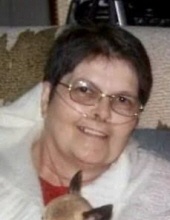 Funeral services will be conducted on Tuesday, April 5th at 2:00 PM at Bills-McGaugh & Hamilton Funeral Home with Pastor Cliff Vines and Brother Kenneth Jones officiating. Burial will follow in Palmetto Cemetery. The family will visit with friends on Tuesday from 12:00 until service time at the funeral home. Pallbearers will be Chris Cox, Shane Cox, Chad Southerland,Wayne Blackwell ,Terry Beatty II and Anthony Lynch.


Born on August 8, 1952 in Lewisburg, she was the daughter of the late James “Ernest” Beatty and the late Salene Phillips Beatty. Judy enjoyed reading, playing puzzle books, fishing. She was a very crafty person, and loved to paint. Mrs. Andrews was a member of the East Commerce Baptist Church.

Bills-McGaugh & Hamilton Funeral Home is honored to assist the family with arrangements. You may share memories and offer condolences online at www.billsmcgaugh.com.