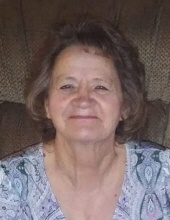 Graveside Services will be conducted on Wednesday, April 14th at 1 PM at Lone Oak Cemetery. The family will visit with friend from 11 AM until 12:45 PM at Bills-McGaugh & Hamilton Funeral Home.

She was the daughter of the late Bonnie Thomas Stinnett and the late Rosie Mae Fitzgerald Stinnett. Joyce enjoyed shopping, video games. She was a big jokester and called everyone “Big Deal”.