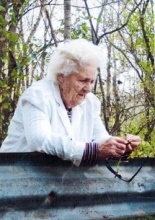 Mrs. Floyd was a native of Marshall County, and was the daughter of the late Andrew King and Reba Mae Conwell King. She was also preceded in death by one son, Andy Pete Luna; one sister, Lucille Alexander; one half-sister, Brenda
Cozart; one half-brother, Jerry King; one grandson, Andy Lee Brown, and one great-grandson, Douglas VanOrdan. She retired from Cosmolab and Moon Pencil, enjoyed working with puzzles, loved reading books, and was of the Presbyterian faith.

Visitation with the family will be held Saturday, August 22, 2015 from 1 PM until 3PM in the Chapel of Bills-McGaugh Funeral Home. Graveside services will be held at 3 PM at Lone Oak Cemetery with Marlin Finley officiating.

In lieu of flowers, please make donations to The American Cancer Society at www.cancer.org.

Bills-McGaugh Funeral Home & Crematory is in charge of the arrangements.
To order memorial trees in memory of Josephine Floyd, please visit our tree store.