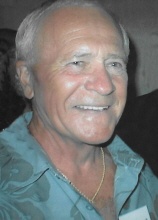 Joseph H. Schlagenhaft, age 82, of Lewisburg passed away peacefully surrounded by his loving family on Tuesday, October 16, 2018. Born January 2, 1936, in Marshfield, Wisconsin, he was the son of the late Herman Schlagenhaft and Dorothy Pfahning Schlagenhaft.

Joe met his wife, Jeannine, in France while serving in the United States Army. He was a loving husband and father who enjoyed camping, fishing, and hunting, making people laugh, and most importantly spending time with his family.

A Funeral Service will be conducted Saturday, October 20, 2018 at 3:00 in the chapel of Bills-McGaugh & Hamilton Funeral Home with Father Jose Kariamadam officiating. Military honors will be provided by the United States Army. The family will visit with friends Friday from 4:00 - 7:00 P.M. and Saturday from 1:00 P.M. until service time at Bills-McGaugh & Hamilton. An interment will be in Marshfield, WI at a later date.

Bills-McGaugh & Hamilton Funeral Home & Crematory is assisting the family with arrangements. Condolences may be extended online at www.billsmcgaugh.com
To order memorial trees in memory of Joseph H Schlagenhaft, please visit our tree store.