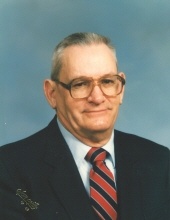 A Graveside Service will be conducted on Tuesday, December 21st at 2:00 at Lone Oak Cemetery with Kyle Bolton officiating. The family will visit with friends on Tuesday from 12:00 p.m. until 2:00 pm at Bills-McGaugh & Hamilton Funeral Home.

Born on December 23, 1930 in Dellrose, Tennessee, he was the son of the late Charlie O’Neal and the late Margaret Smith O’Neal. He was a data operator for over 35 years. John was an avid fan of the St. Louis Cardinals, University of Tennessee football and basketball teams. Mr. O’Neal was a devoted member of Church Street church of Christ.

In addition to his parents, he is preceded in death by his brothers, Billy O’Neal, Leroy O’Neal, Charles O’Neal, and James Smith O’Neal.

In lieu of flowers, memorial contributions may be made to the Church Street church of Christ Scholarship Fund.