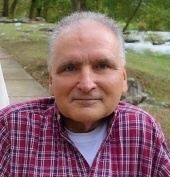 John Wesley Childress, age 66 of Lewisburg, passed away on Sunday, February 8, 2015 at Maury Regional Medical Center in Columbia. A native of Lincoln County, Mr. Childress was the son of the late George Elmer Childress and Edith Dunn Childress of Lewisburg, who survives. In addition to his father, he was also preceded in death by one sister, Emma Jean Childress, and two brothers, David and Paul Childress.

John graduated with a Masters Degree at Vanderbilt University, was on the Marshall County Tax Equalization Board for twenty-five years, a former County Commissioner, was actively involved in the family business of Belfast Rock and co-owner of Childress Storage, and served on the board of The Child Development Center for many years. He loved traveling the world, was an avid photographer, and had a passion for history and genealogy.

Bills-McGaugh Funeral Home & Crematory is in charge of the arrangements.
To order memorial trees in memory of John Childress, please visit our tree store.