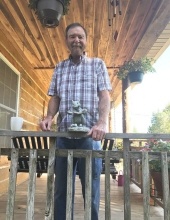 A private family graveside service will be held at the Davis Family Cemetery with Tom Gabbard officiating.

Born on October 1, 1943 in Belfast, he was the son of the late A.C. Davis and the late Emma Grace Phifer Davis. Shelton served as a Sergeant in the United States Army, during the Korean War. He was a 50-year member of the Masonic Dillahunty Lodge 112, served as a VFW commander, and a member of the International Brotherhood of Electrical Workers Local 429. An avid outdoorsman, he loved hunting and fishing. Shelton was an Industrial electrician for many years. He also enjoyed wood working, repairing antiques, doing upholstery, and just about anything else. Mr. Davis attended Grace Baptist Fellowship.

In addition to his parents, he is preceded in death by a sister, Wanda Jane Hutchinson.

Bills-McGaugh & Hamilton Funeral Home is honored to assist the family with arrangements. Condolences may be extended online at www.billsmcgaugh.com.
To order memorial trees in memory of Joe Shelton Davis, please visit our tree store.