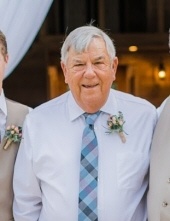 Mr. James “Jimmy” Boyte Sanders, age 76, resident of the Mooresville Community, died on Tuesday, March 29, 2022, at Tristar Centennial Medical Center in Nashville, TN.
Visitation will be held Friday, April 1, 2022, in the chapel of Bills-McGaugh and Hamilton Funeral Home from 4p.m. to 7p.m. Funeral services will be on Saturday, April 2, 2022, at the funeral home beginning at 2p.m. Burial will follow to Bryant Cemetery in Mooresville, TN. Reverend Ken Klassen and Reverend Frank Smith will be officiating.

Born April 22, 1945, in Ashland City, TN, he was the son of the late Kniowlen H. Sanders and Annie Boyte Sanders. On June 12, 1964, he married his beloved wife, Genie. He was a fulltime farmer and longtime employee at ICP in Lewisburg, TN. After retirement he was a bus driver for the Marshall County School Systems. He was known as the Colonel, Jimmy, and Boppa. Jimmy was a loving son, husband, father, grandfather, great grandfather, mentor, neighbor, and friend to many.

He is preceded in death by parents; sister, Judy Phifer, and brother Dale Sanders.

In lieu of flowers please make a donation to the Usher Syndrome Society. https://www.ushersyndromesociety.org/donate.html

BILLS-MCGAUGH & HAMILTON FUNERAL HOME & CREMATORY is honored to assist the family with arrangements. Notes of sympathy may be offered online at www.billsmcgaugh.com.

To order memorial trees in memory of Jimmy B Sanders, please visit our tree store.